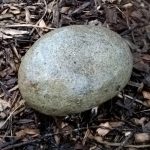 I thought to blog about Horticulture Therapy, but the topic is sizeable. Instead, I chose to highlight two well-known authors who wrote about the therapeutic benefit of stones.

Psychiatrist Harold Searles was troubled by the extent to which technology was interfering with people’s ability to relate to nature. “Over recent decades we have come from dwelling in an outer world in which the living works of nature either predominated or were near at hand, to dwelling in an environment dominated by a technology which is wondrously powerful and yet nonetheless dead, inanimate.” (1960) Searles’ relations theory identified a hierarchy of complexity, with relationships to people being the most complex, followed by animals, then plants, then stones. According to Searles, people at a low level of mental strength can get help from the most simple relations, such as those to inert objects in nature, e.g., stones.

Johan Ottosson, author of many articles on nature-based rehabilitation and health promotion, at the age of 39, was hit by a car when he was cycling to work, and suffered head injuries. For his doctoral thesis in Landscape Planning, he wrote about his rehabilitation experience. Searles’ idea of nature as a link between the conscious and the subconscious appealed to Johan. Ottosson writes, “Searles maintained, contrary to contemporary mainstream thought, that Nature plays an important role in our mental health. People in crisis need ‘stable’ environments in order to feel well.” 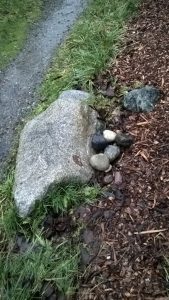 Ottosson wrote his photographic essay in the third person (excerpt):
“When he thinks back to the early days, right after the accident, he is surprised by how many of his impressions from the natural surroundings are connected with stones. The untouched stone with its blanket of lichen and moss in various shades of green and grey gave him a sense of security through its timelessness, calm and harmony. It was as though the stone spoke to him: ‘I have been here forever and will always be here; my entire value lies in my existence and whatever you are or do is of no concern to me’. The stones did not speak to him in words, but in feelings, which made the relationship both deep and strong. The feelings calmed him and filled him with harmony. His own situation became less important. The stone had been there long before the first human being had walked past. Countless generations, each with lives and fates of their own, had passed by.”

Ottosson’s recovery was very challenging. For nine years after the accident he could not read or write, but he developed a personal system of symbols and was assisted by computers, tape recorders and secretaries. His career continued at least through 2017.

Look, we have a lot of stones in the orchard, including a pile of them in the north end. I 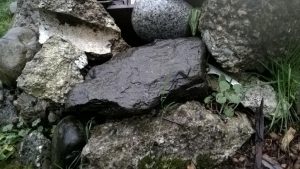 frequently pick up a rock, admire it, and put it back down. If you are walking slowly, you may spot a stone that speaks to you. What does it say?

For a good book on Horticulture Therapy, I can recommend:
Sue Stuart-Smith, The Well-Gardened Mind
(2020), Scribner: New York City 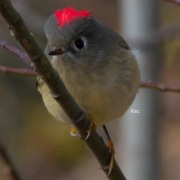 The Microbes Version of the Thermal Compost

The Legacies of Five Pioneer Volunteers Is Anything Happening in the Winter? Don’t yawn yet!
Scroll to top