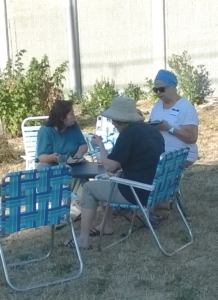 Being a conscientious citizen, I removed my license plates and am cruising around the neighborhood looking for people who are not practicing social distancing and blasting them with my super soaker.

My cousin advised me to be extra careful because retaliation might come in the form of lead (bullets) since there are a lot of crazies out there. I told him that I know and fortunately I’m not one of them.

Janet, I hope you are not serious. In fact, there are many small groups of people who live in the same apartment. They share one bathroom and one kitchen. There is no way they are not family. It would be impossible for them to wash and disinfect the doorknob every time they used it.

Imagine trying to pay rent in Seattle and going to school, or working at Starbucks. People have to get out. Not everyone lives in a house with a yard.

Most volunteers remember Janet as quite, soft-spoken, and easy-going. But she also had wit, many talents, and contributed to FECO events from all directions.

Janet died recently. It’s hard to believe. I had not heard from her in a while so I paid a visit to the Seki household. It turned out that she had been very ill for several months.

Janet and I exchanged a lot of emails over the past ten years. She was always in the background, thinking of ways to support the orchard. Masaaki and Erin (spouse and daughter) have also been steadfast supporters of the orchard, and continue to be so!

The project that she worked the hardest on was an attempt to have an emergency hub (HUB in a BOX) at FECO. She had neighbors working on it, wrote a grant application, and sorted out all the details. But, when it came to asking permission from WSDOT, well, you guessed it, WSDOT was not interested.

She brainstormed security after one of the shed break-ins and forwarded many solutions. One solution was particularly interesting:

“Another thing would be to string some tripwires a few inches above the floor to trip them. People with keys would have to warned.”

By this point in time I was alert to her jokes. Soon after the break-in she forwarded a check to cover the cost of a new lock.

She worked all of the Cider Fests: donated apples, tables, a canopy, often surprised us with fine hand- 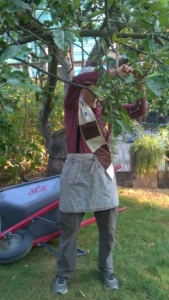 sewn items and other crafts or jams to sell. Personally, I purchased the most beautiful and useful garden apron. Janet also made me a custom sash so I could be ‘hands free’ at the Cider Fest. Such a great idea.

“… But it seems to me that some could be hired by the city to be caretakers of public gardens. Their jobs would entail reporting vandalism, weeding, raking, etc., and they would get paid for their services. I think the city should build them a tiny house to live on the premises. Ultimately the hope would be to get them back on their feet so they could move on. Then another could take the vacancy. In my hometown there was a caretaker living in a small cottage in the park…”

Janet would make me aware of plant sales, potential grants, possible organizations to search for volunteers, and she provided input at the 20-hour club annual dinner meetings: 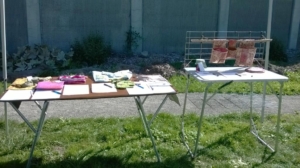 “I wanted to talk about having social justice activities at FECO — perhaps some sort of picnics among people of different backgrounds. It seems vital that we do all we can towards that goal. We can also smile at or complement  a stranger. Both cost us nothing but have far reaching effects.”

She designed a questionnaire/survey for the 2017 Cider Fest to ask visitors what they would like to see and support at FECO, handed out booklets on invasive plants, and also drummed up ideas for classes:

“Today I listened to a webinar on dealing with coyotes which involves training both people and coyotes. I think that might be one class to teach at FECO. Another class might be birding with binoculars. I have a new cookbook about how to use more food so as not to waste it. Perhaps volunteers could work At FECO and as a reward, stick around to take a class.”

You can now understand why we will miss Janet Seki. Always in the background. Always supportive. 12th (wo)man!

Oh! P.S. Here is a tip that was inserted in one of her emails on a totally different topic:

“Also, you probably know that potato chips and corn chips are good fire starters because of their oil content. Just light them with a match or lighter, and POOF, you have a fire going.”