Alec is a new volunteer. His profession is landscape design and he worked hard on the recent 60th St restoration project. He is also a stellar bird enthusiast and photographer!

A couple of weeks ago, I spotted a bird in our yard that I did not know. Excited, I emailed Alec. 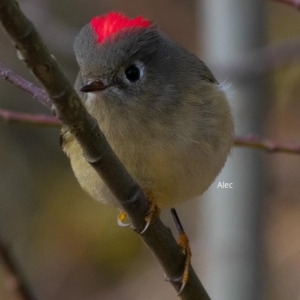 Ruth: Tiny bird … like a bush tit. I think a bit smaller than a sparrow.

And, it flits about quickly. At first I thought it was our hummi, but then I noticed that plump belly! It flit about from branch to branch … twitchy. Yet, it landed pretty close to me so it wasn’t like the Bewick who won’t get near you. Don’t sweat it. Maybe I will see it again when I don’t have an extension ladder in my hands!

Alec: Based on the size it’s likely either a Golden Crowned Kinglet or Ruby Crowned Kinglet. They are the only two that small and that fly frantically around as you described. Hopefully it’s one of the two 🙂

Ruth: You are right on Alec. Ruby crowned kinglet. Everything matches. That striking black and white slit was not on the eye but on the wing.
Thank you!

I was impressed. I asked Alec if FECO could be an

site. He set it up immediately .

Alec: I’ll keep my eyes out more when I’m there & I’ll bring binoculars more often too. Sure 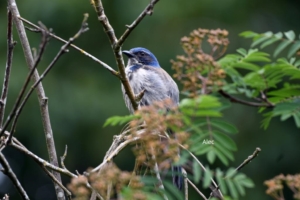 there’s quite a few birds that have been seen that aren’t on the list yet. I’m assuming some ducks flyover from time to time. Potentially had snow geese flying over today but I didn’t have binoculars so I can’t confirm if it was Snow Geese or Cackling Geese. They were geese based on the v-shaped flight pattern.

Oh my. I didn’t reply but Alec offered more later:

I believe the flock of geese I saw yesterday were 12 Greater White Fronted with 2 Cackling Geese mixed in but unconfirmed. Cross off Canada Geese as a possibility due to the size. Due to how low the geese were flying, that it was likely not Snow Geese, since mostly I’ve seen them fly much higher, before they pick a spot to land. The Greater White Fronted match the size of the Geese I saw. The timeline, flight direction, and size would match up perfectly with the small flock that showed up at Union Bay Natural Area yesterday around 2pm. Not gonna put it down but it’s probably what I saw.

Sheesh! This guy is into it. Not going to put in down? If I could have this kind of focus on any aspect of my life.

During work parties, I have been pulling Alec apart from other volunteers who start asking bird questions. Tasks would stall. Now I let Alec do whatever he wants.

Today, during a long walk, I got a big smile on my face when I noticed a bird that I had never seen before. I needed Alec’s sharp ID skills. I snapped a photo but, before I forwarded the photo to Alec, I sent him the description:

Ruth: Small bird, noticeably calm, not timid and her feet were tucked underneath her. All white … could barely tell her apart from the snow.

I waited for an email from Alec. Sure enough, the email came:

Alec: Did you get a photo?

Yes! I replied, here it is attached!

Everything From Fruit To Nuts

Find a Stone that Speaks to You: The Magic of Nature in Times of Crisis

Everything From Fruit To Nuts

Whether to Wonder about Weather
Scroll to top